PETRA: A Rose-Red City Half as Old as Time 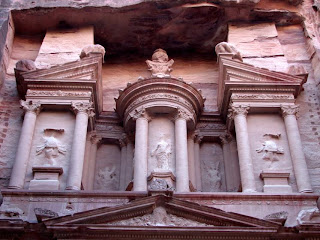 Meaning: Rock
Location: South western Jordan, between the Red Sea on the south and the Dead Sea on the north.
Size: About 40 square miles, but main sights are in a compact area. 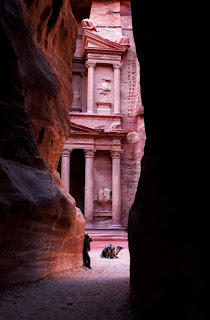 Petra is the treasure of the ancient world which is hidden behind the barrier of rugged mountains. The rock carved rose-red city of petra speaks about the mystery of an ancient civilisation. A wonder of the ancient world, its architecture is breath taking. The entire city is designed to strike wonders in anyone who dared enter it. Its exquisiteness was hidden from the modern world until 1812, when Swiss explorer Johann Ludwig Burckhardt rediscovered it and revealed its beauty. 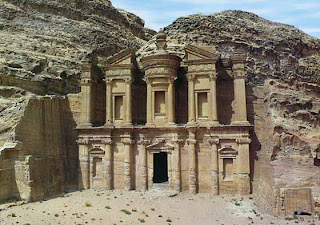 Petra was home to the Nabataeans. The Nabataeans were nomadic Arab people from north Arabia. They began to settle in the Petra area from the late 7th century BC. There, they built temples, houses, halls, tombs, altars and aquaducts. They built a civilisation that is a centre for commerce as the spice routes and trading trough the time all flowed through the city of Petra. 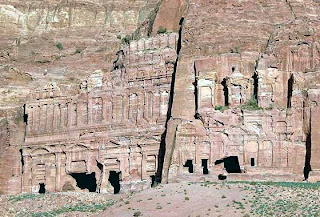 Petra is always a beauty to behold, breath taking and never to be forgotten. There are over one thousand burial monuments in Petra. Most of these were for family and other tribal units. According to the inscriptions, the tombs were made by the Nabataean sculptors and not by slaves. Petra was a religious city and an urban centre for the Nabataeans.

Aaron's Mountain (Jabal Harun) is the most commanding of the mountains that encircle Petra. It is a place of local sanctity. It is believed that Aaron, Moses' brother died and was buried. 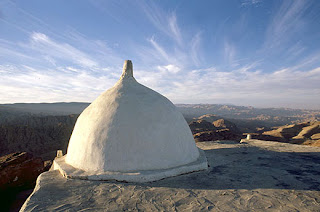 The Khazneh or Treasury - most perfectly preserved of all the monuments of Petra, and the most beautiful. Probably a tomb of one of the Nabataean Kings. But it is a mystery that no body was ever found in there. It is the first facades you see as you enter Petra and is also world famous because of the Indiana Jones "The Last Crusade" movie. 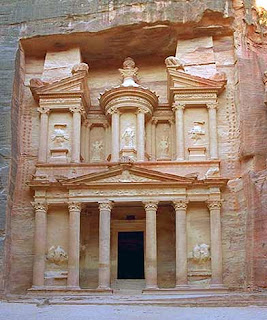 The real mystery of Petra is that how little is known about its history and the people that lives there. Hidden under the rocks are the tombs that are still undiscovered. Some believed that beneath the sand and rocks, treasures were hidden. Once hidden from the modern world, Petra still manages to reflect its mystery that is hauntingly beautiful for the world to see. 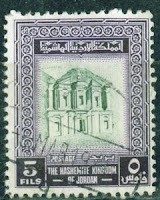